Lots of renowned teams and players from Himachal and neighbouring states are expected to participate in this.

You can also register your team at Kuldeep Hardware Store Sandole, Contact No 9459054822. 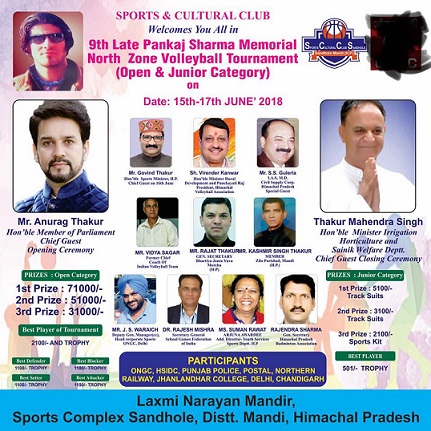 On the occasion of chaitra navratri, Sandhole Vyapar Vikas Samiti is organising a vishal bhandara at Baba Kamlah Fort, 8 km from Sandhole from Sunday 18th March 2018 to Sunday 26th March 2018. Food will be served day & night on all days.
The bhandra – food as a worship offering to celebrate chaitra navrati and seek blessing of maa. Everyone is requested to come, eat and seek blessing of baba ji.

If you are interested to do any service, Please contact Rajender Mandhotra, President Vyapar Vikas Simiti Sandhole.

Local MLA and honorable IPH minister of Himachal Pradesh, Shri Mahender Sigh Thakur during its visit to various villages of Sandhole Tehsil announced road map of various link roads under Pradhan Mantri Gram Yogana. He laid down the foundation ceremony of second phase of road between Deyol to Lahsani to be build at the cost of 419.58 lakhs. During his visit also announced and sanctioned funds for Gowalla Link road, Cheej link road and other key initiatives.

In public connect programme Anurag Thakur, MP Hamirpur visited Sandhole on 25th Feb 2018 and addressed the public in four gram Panchayats. He started his day with meeting at Ghanala. Mr Thakur informed that he has given 2 crore and 25 lakhs from his MP kitty to Dharampur assembly constituency for various development works but was surprised to see that nowhere he could find any board displaying this information. He directed concerned officers and public representatives to display this information within 15 days.
He also promised that foundation stone and construction of Kendriya Vidyalaya campus will be done very soon. He gave 3 lakh to build community centre at Ghanala and instructed to start construction in 15 days.
Later in the afternoon he addressed public at Govt Primary School Dattwar followed by Torekholla and Koon.

HRTC has resumed its service on Chamba-Dharampur route-
•• CHAMBA to DHARAMPUR ••
Route: Chamba-Jot-Kangra-Tanda-Palampur-Shivnagar-Jaisinghpur-Harsipattan-Sandhol-Marhi-Dharampur
Depot: Chamba
This bus will also make use of Harsipattan bridge, which was opened for public few years ago but didn’t see being used to its full potential and connecting two districts.
Schedule-
Chamba (Dep.)- 7:30 am
Kangra (Dep.)- 1:30 pm
Palampur (Arr.)- 3:00 pm
Dharampur(Arr.)- 7:30 pm

Anurag Thakur, member of parliament (MP) will visit Sandhole on 25th Feb 2018 (Sunday). He will be meeting party workers in various gram panchyats. He will start first session at 10:00am at Ghanala, followed by meetings at Dattwar, ToreKholla and Koon between 10am to 4pm.
People are requested to make full use of these meetings; review the development work has been taken or not taken in last 9 years.

Panchkula based educational society led by Dr OP Singh has been provided free coaching classes to aspiring doctors from Himachal Pradesh. It is starting a new crash course on 25th March. To identify students for this course society conducted evaluation examination at Sandhole in which students from Govt and private schools participated. Society has selected 7 girls students from 12th class and will provide free crash course to crack NEET. Society plans to conduct similar test in Dharampur, Tihra, Cholthera and Kamlah.
Society also conducted screening testing for students of 10th and 11th classes and provide 2 year course. Panchkula Educational Associate will bear this cost which normally costs Rs2.5 lakh.
Hopefully students will utilise these opportunities and we will see many more students joining the medical colleges. Wishing all the aspirants best.

Along with CM, council of minister also took oath. Leading the pack of ministers was Thakur Mahender Singh, Seven-time BJP MLA from Dharampur in Mandi district.

Mahender Singh has been representing the Dharampur since 1990 and He has been elected to the cabinet twice. He was cabinet minister in the Prof Dhumal led BJP govt. He held the portfolio of Transport department from 2009-2012. He also remained as a Cabinet Minister during his previous term 1998-2003 and held various portfolios including Rural Development, Panchayati Raj, Excise and Taxation and PWD during the 1998 – 2001.

This is third time that he has been made minister. This will definite going to help the people of Dharampur and Sandhole and fulfill the poll promises.

This was third straight fight between both and every time Mahender Singh has been winner. In 2017 assembly election many prominent leader failed to save their seats, key ones BJP CM candidate PK Dhumal, BJP state president Satpal Satti, Congress ministers Kaul Singh and GS Bali but Thakur increased the winning margin.

With BJP getting full majority, Thakur is bound to get a cabinet berth.

Final Votes polled for each candidate contested from Dharampur