The official candidates of BJP and Congress have been declared and it will be third time that Mahender Singh incumbent MLA (BJP) will be challenged by Chander Shekhar (Congress).

Thakur Mahender Singh has been representing this constituency since 1990 and has been minister in twice. Chander Shekar though lost the 2012 election (also 2007) but he was appointed Vice Chairman of Himachal Pradesh State Handicrafts and Handloom Corporation (HPSHHC). He also got opportunity to be in Govt and serve the people.

Both of them had resources, power and opportunity but people will let who did better on 9th November 2017.

In 2007 it was a triangular contest with Natha Singh fighting as independent but in 2012 it was direct between both of them.

Congress is having incumbency factor in state but has already declared CM candidate and Chander Shekhar has good relations with Shri Virbhadra Singh. On the other hand though BJP has not declared CM but Modi wave is still live, Mahender Singh being senior leader if party form Govt will certainly get some key post. But who will win, only voters tell on 9th November 2017

We have not seen much development in the constituency and there had been growing anger in public. Many villages declared to boycott election, this may not actually happen.

Irrespective of vikas of Sandhole or Dharampur, the personal wealth of both continues to grow, see chart. This doesn’t include the wealth of spouse, notable Mrs Thakur owns a hotel Manali Valley and her total assets value is more than 9 crores. 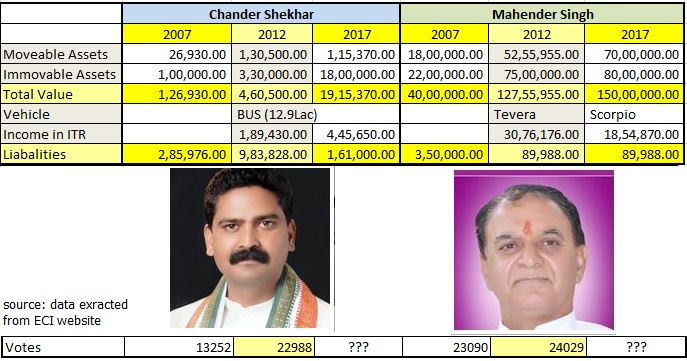 Source: Election commission of India, affidavit submitted at the time of filling nomination.

Will it be 7th straight victory of Thakur Mahender Singh and improving his own previous record?

This entry was posted in news, political. Bookmark the permalink.